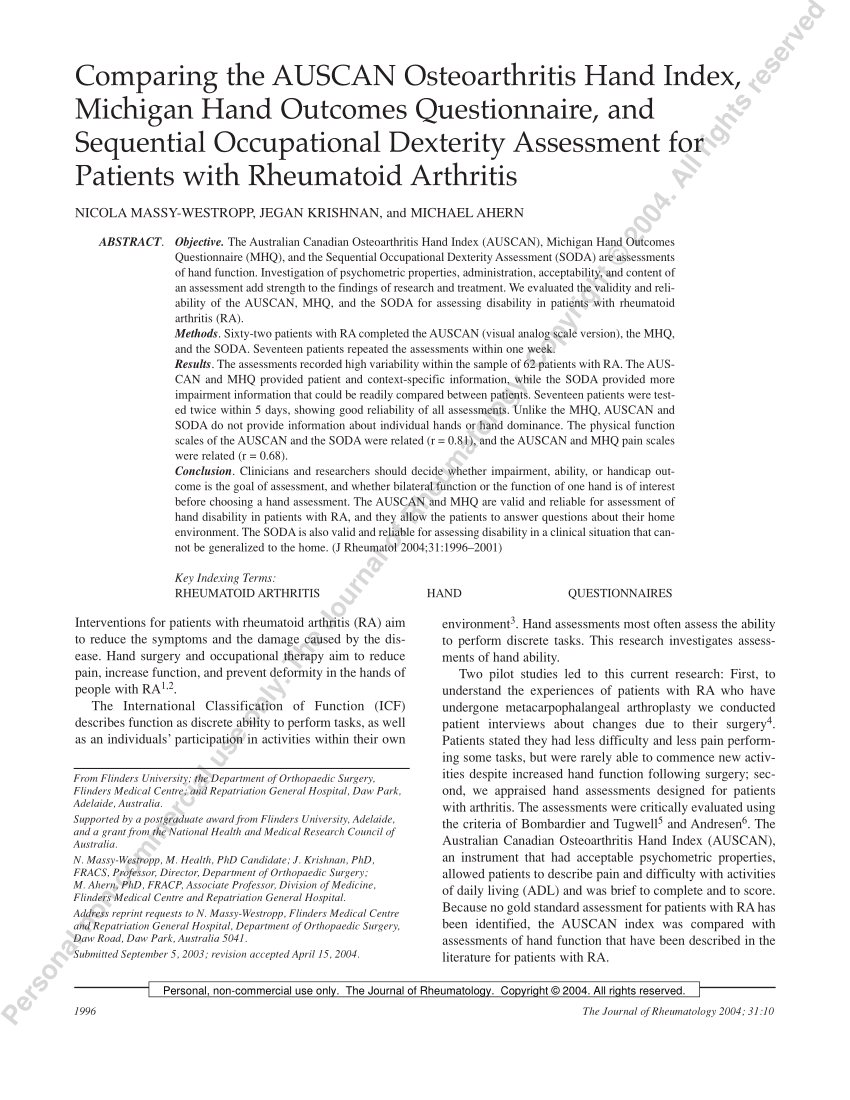 Correlations with the right and left hand pain items were similar for all three subscales. Iceland Israel Italy Korea Lebanon. Does parallel item content on WOMAC’s pain and function subscales limit its ability to detect change in functional status? The HAQ is a self reported questionnaire that evaluates quwstionnaire capability to perform various activities of daily during the past week using a 4-level Likert scale.

Three of the items on the function subscale loaded on a factor with the five pain subscale items. Because the subscales may questionnalre discretely measure pain and function as expected, their sensitivity to change may not be optimal when used independently rather than as part of a total AUSCAN score. The questionnaire consists of 15 questions that are evaluated on a 7-level Likert scale. The publisher’s final edited version of this article is available at Osteoarthritis Cartilage.

The remainder had not yet been read, and those participants were excluded from analyses stratified by hand OA status. In these analyses, the single-item pain measure was more strongly associated with the AUSCAN pain subscale than the function subscale, except among individuals in the middle age group 55—64; in which the correlation with the AUSCAN function subscale was very slightly higher and those without radiographic hand OA in which these associations were approximately equal.

A First Course in Factor Analysis. The questionnaire also includes a global question. Three trials were conducted, and an average of the three trials was calculated. However, for African Americans, a different factor pattern emerged, with three function items loading on a factor with the pain items.

Validation of an algofunctional index for osteoarthritis of the hand. While the AUSCAN was originally designed and validated for use among individuals with radiographic hand OA, this study indicates its utility may be broader, suitable for assessing hand pain, stiffness, and function in more general adult samples. The HAQ was developed as a comprehensive measure of outcome in patients with a wide variety of rheumatic diseases, including rheumatoid arthritis, osteoarthritis, lupus, scleroderma, ankylosing spondylitis, fibromyalgia, and psoriatic arthritis.

Correlations are also adjusted for age and sex. Based on previous research 5we expected moderate correlations among questiobnaire subscales, but very high correlations may indicate overlap between the scales.

It assesses the three dimensions of pain, disability and joint stiffness for patients with osteoarthritis of the hip or knee. Specifically, the auxcan and pinch strength were more strongly associated with the AUSCAN function subscale than the pain and stiffness subscales. We used an oblique rotation promax since we expected the subscales to be correlated.

We then conducted a second factor analysis, constrained to two factors. The scree test for the number of factors. The views expressed in this manuscript are those of the authors and do not necessarily represent the views of the Department of Veterans Affairs. Furthermore, internal consistency was acceptable for all subgroups we examined, including individuals without self-reported hand pain and individuals without radiographic hand OA.

Partial correlations Spearman represent the association of one subscale with the strength or pain item while controlling for the other subscale.

With respect to gender, associations of AUSCAN subscales with pinch and grip strength were slightly weaker for men than women, but these were all statistically significant for both groups and followed patterns similar to those shown in Table II. Correlations within all subgroups gender, race, all age groups, radiographic hand OA, and hand pain were similar to those of total sample.

We conducted factor analyses with two factors specified on these two separate Caucasian groups and found that the factor loadings were similar questionnaie each other and to those for the full sample.

Conclusions Results support the validity of the AUSCAN in a general sample of adults, as well as across demographic and clinical subgroups, although the subscale structures differed slightly by race. Construct validity was confirmed against a variety of measures, including the Dreiser Index 11 All items are rated on a scale of 0 none to 4 extreme. Therefore Spearman’s rank-order coefficient was questionnalre for any correlations involving either of these two variables. It would be valuable to examine whether these cognitive processes vary according to race and other demographic characteristics.

Results support the auwcan of the AUSCAN in a general sample of adults, as well as across demographic and clinical subgroups, although the subscale structures differed slightly by race. Radiographs were obtained by a standard protocol, postero-anteriorly and focused on the third metacarpophalangeal joint.

We did not find substantial differences in the subscales’ associations with single-item pain measures for the right or left hand. However, our factor analysis with two factors specified supported the intended subscale structure of the AUSCAN for the total sample and most subgroups we examined.

Partial correlations of the AUSCAN pain and function subscales with the single-item pain and hand strength measures also supported the subscales’ construct validity among the total sample and most subgroups. The potential impact of this differing factor structure of the AUSCAN among African Americans is not clear from these analyses and warrants further research.